Credited with creating the world’s first boutique hotel — Blakes in South Kensington, London — more than 40 years ago, interior designer Anouska Hempel’s portfolio runs the full gamut of luxury. This includes high-end residential and retail interiors, landscaping projects, product design for brands such as Louis Vuitton and yacht interiors to her own haute couture label worn by heads of state and British royalty.

Also known as Lady Weinberg through her marriage to British financier Sir Mark Weinberg, the New-Zealand-born, UK-based Hempel was a noted actress in her younger days, appearing as a Bond Girl in the 1969 Bond movie On Her Majesty’s Secret Service.

Her distinct style, which swings between theatrical opulence and serene minimalism, can be experienced here in Singapore, at Duxton Reserve, part of The Garcha Group’s luxury boutique hotel portfolio.

Exuding “a buzz of the spice routes at the crossroads of the world”, Hempel’s design for the hotel, which is housed within a row of eight heritage shophouses, draws elements from Chinese, Malay and European cultures.

Intimate yet dramatic, the lobby stuns with large, mustard-coloured fans reminiscent of a setting sun and layers of Oriental screens and calligraphed wallpaper in striking shades of black, gold and yellow.

Each of the boutique hotel’s 49 rooms is imagined along one of eight themes, such as the Opium Rooms and Suite featuring ebony walls and Chinese canopied platform beds, and the light-filled, all-white Pearl Suite, which is accented with whitewashed tropical textures such as rattan and blond wood.
There’s even a bar named after Hempel. Anouska’s serves up Asian-inspired cocktails featuring ingredients such as chrysanthemum, lapsang souchong and pickled green chili, coupled with mouthwatering delights from adjoining Chinese restaurant Yellow Pot.

I cannot emphasise enough the importance of having the right day bag. My Bottega Veneta tote is a black beauty that’s always de rigueur. It must be 10 years old now and it really is my lifelong friend. From the day I bought it in Milan, it has proven large enough to fit literally everything – everything from files and phones to towels and even tents!

I picked this up in Santiago when I was working on a project for the Garcha Group. [Ed: The Garcha Group will soon debut a new hotel in Santiago, Chile.] It inspired me to create the hotel’s street-chic bar as well as the design of the uniforms worn by staff at the entrance lobby. I take it everywhere. You’ll find it hanging on the back of a hotel door, sitting on a car seat by me, or on top of a stack of suitcases. It has travelled with me to Brazil, Singapore, Oman, Morocco, Beirut and Istanbul.

This is a really effective jet lag remedy. It’s 100% natural and 100% homeopathic, containing a range of natural ingredients such as arnica, bellis perennis (English daisy), cocculus, gelsemium and petroleum. It really lets you get on with the day, without the lag.

Travels with My Aunt by Graham Greene

This timeless novel follows the travels of Henry Pulling, a retired bank manager, and his eccentric Aunt Augusta as they find their way across Europe. I enjoy the author’s wild, unconventional and enlightening account of the voyage of an ordinary, retired bank manager and his eccentric, daring aunt. It makes my imagination travel to all the places they visit, like England, France, Italy, Morocco, Spain, Turkey and (the former) Yugoslavia. With travel a distant memory at the moment, this story is a great tonic!

I prefer to be barefoot if I possibly can, but that’s only for when I’m in my London studio. These Cendrillon pumps were originally made for Brigitte Bardot and are from Maison Repetto, the same company that makes ballet shoes for the French ballet school in Paris. They are usually black but can also be red, or bright yellow, like the colour of Duxton Reserve in Singapore! They’re ideal for nipping around in from dawn till dusk.

These are covered in black silk dupion fabric and accompany a copper-coloured blanket I roll up and take everywhere, in case I stay out late and there is a chill in the air around the dinner table.

Berta Battiloro is a Venetian artisan laboratory that manufactures gold leaf for artistic decorations as well as cosmetic and culinary purposes. Its gold leaf is believed to have anti-inflammatory and restorative properties and to promote a radiant complexion. I eat a bit the size of my fingertip every day.

Hotel Heroes: What It’s Like to Be Bar Manager at The Capitol Kempinski

Hotel Heroes: What It’s Like to Be a Wellness Specialist at Raffles Hotel Singapore 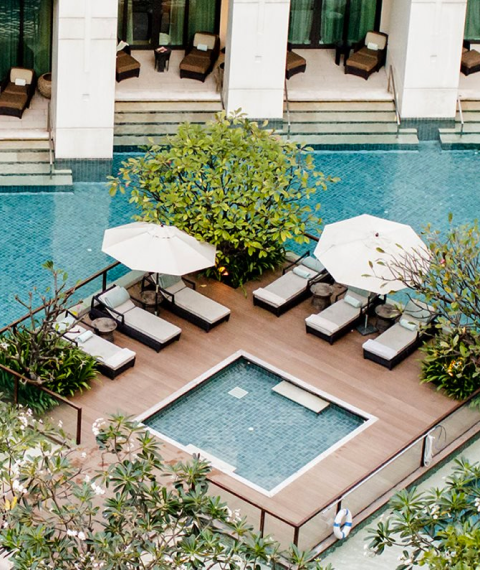